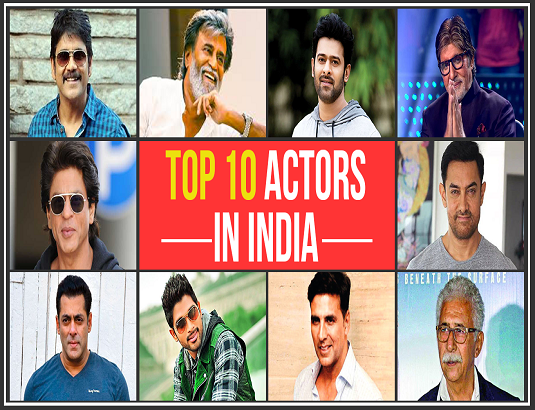 What you like to do in your free time or how you spend your quality time? Most of us will answer that by watching movies of our favorite or top 10 actors in India, we can easily spend quality time. No doubt, movies are the best option to entertain you and relax the mind in this highly busy time.

India is one of the biggest movies producing country in the world with more than 1000 movies release in a year. In India, there is various films industry like Bollywood and other regional languages films. The market value of the Indian film industry in the 2020 financial year is around 183 billion rupees. With this stat, you can easily guess the popularity of Indian cinema.

Together with Indian cinema, its actors are also highly popular among their fans worldwide. To gossip about Indian actors is always a favorite topic on social media platforms and they have millions of followers on their social media handles. But as we all know some of the top Indian actors have a huge fan base across the world. This all is because of their fascinating personality, aura, and movie selection.

Who is the Best Actor in India?

There are various actors having huge famous among people. But some of them made huge impacts that even after their death; they remain in the heart of their fans. Also, some of the current generation actors have huge popularity among their fans. Let’s discuss the top 10 bollywood actors in India and why they are considered as top Indian actors.

The list of top 10 actors in India is incomplete without the name of “The Tragedy King” or Dilip Kumar. He died on 7th July 2021 but leaves a legacy behind him which makes him one of the best actors in India. He is one of the famous actors in India and is also considered as the impactful star of the Indian film industry. He was born on 11 December 1922 at Peshawar, British India and his previous name was Mohammed Yusuf Khan.

Dilip Kumar Awards- He holds the record of winning most ‘Filmfare Award for Best Actor’ in Indian Cinema. He also won the “Dadasaheb Phalke Award (1994)” and was honored by the Indian Government with “Padma Vibhusan” in 2015. Without any doubt, he is the one of the best actors in India.

Recently his ancestral house in Pakistan which was declared as the National Heritage Site is going to purchase by Pakistan’s Khyber Pakhtunkhwa Government at the price of 2.35cr.

Rajesh Khanna is also under the list of top 10 actors in India. No actor in Indian Cinema history has created as much mass hysteria among audiences as superstar Rajesh Khanna. He was born on 29th December 1942 in Punjab. He is referred to as the first superstar and best indian actor of the Indian film industry and has a record of 15 consecutive solo superhit movies from 1969 to 1971. Do you about the Top 10 Korean Actors? Checkout this blog.

Rajesh Khanna Movies- During his whole career, he worked in more than 170 films like “Akhri Khat”, “Haathi Mere Saathi”, “Anand”, and more. He is also one of the highest-paid actors from 1970 to 1987. His popularity among female fans was unmatchable to date as some of her female fans sent him a love letter with blood. He died on 18 July 2012 but leaves a legacy behind him which makes him one of the best hero in India.

Rajesh Khanna Awards- On 30 April 2013, Rajesh Khanna was officially recognized with the title of The First Megastar of Indian Cinema at the academy of Dadasaheb Phalke Awards.

Amitabh bachchan is also under the list of 10 best actors in India. Amitabh Bachchan is the most popular actor in India. You all are well aware of the “Shahenshah of Bollywood”, “Sadi ka Mahanayak”, “Angry Young Man”, and “The Greatest Actor of the Century”. These all are the names given to the most famous actor in India – Amitabh Bachchan. He was born on 11 October 1942 at Allahabad, Uttar Pradesh. With his dominance in the Indian film industry for more than 5 decades, he is regarded as one of the top actors in India.

Amitabh Bachchan Movies- In his entire career, he worked in more than 200 films, and also the number is continuously increasing. Some of his most popular films are “Sholay”, “Deewar”, “Don”, “Muqaddar ka Sikandar”, “Suhaag”, “Paa” and more. He got “Padma Vibhusan” in 2015 and “Knight of the Legion of Honour”.

His craze among people is unmatchable that in Kolkata there is a temple where people worship him as God. Currently, he is hosting one of the biggest TV shows – “Kaun Banega Crorepati” and also shooting for the upcoming movies like “MayDay” and “Jhund”. During the Covid-19 pandemic, he also gave his voice for the caller tune related to COVID-19 precautions which was now removed by the court after filing a petition in High Court against it. Amitabh Bachchan is also under the list of top 10 bollywood actors in India.

Even if you don’t watch movies, you must aware of the name – “Rajinikanth”. He is one of the best actors in India who majorly works in the south film industry. His birth date is 12th December 1950 in Bangalore. He is widely considered as the greatest and the famous actor in India due to his uniquely styled dialogues and unmatchable acting skills.

Rajinikanth Movies- Some of his most popular films are “Apporve Raagangai”, “Baashha”, “Amar Akbar Anthony”, “Sivaji”, “Robot” and more. After “Sivaji” movie release, he became the highest-paid actor in Asia only behind Jackie Chan.

Rajinikanth Award– He was also honored with Padma Vibhusan in 2016 by the Government of India.

He is also the only Indian actor featured in the syllabus of the CBSE board in a lesson titled “From Bus Conductor to Superstar”. In South India, he is worship by people and also has some temples in his name. Recently he also decided to form a political party, but due to poor health, he leaves this decision and continues to work as an South Indian Actor and social worker.

One of the richest actors in the world and the best hero in India. Shahrukh khan (King Khan) doesn’t require any introduction. His name is enough to describe his popularity across the world. His birth date is 2 November 1965 in New Delhi.

Shahrukh Khan Career & Movies– He started his career as a television actor, but after stepping into Bollywood, he became the famous bollywood actor in India. In his entire career, he worked in more than 80 films like “Deewana”, “Baazigar”, “Devdas”, “Swades”, “Happy New Year”, and more. Besides acting, he is also one of the popular business-minded men and owned “Red Chillies Entertainment”, “Kolkata Knight Riders”, “Trinbago Knight Riders”, and more.

His name itself is considered as a brand and makes him the most successful film star in the world. He is also the brand ambassador of Dubai tourism and various big brands. He was honored with various awards like Padma Shri, Legion of Honor (French Award), and UNESCO’s Pyramide con Marni award, World Economic Forum Crystal Award, and more. He also received an honorary doctorate for humanitarian work and achievement in the Indian film industry from La Trobe University in 2019. He’s also under the list of Top 10 Actors In World.

The list of top ten actors in India is incomplete without Salman Khan, popularly known as “Bhai of the Bollywood”. He was born on 27 December 1965 at Indore, Madhya Pradesh. He is the only Indian best Actor whose name is enough to make a movie superhit even without any storyline. He is also the top paid Indian actor with having a net worth of $260 million.

He is also hosting the popular TV show “Big Boss” and running a Being Human Foundation to support poor people. In 2020, he was also ranked 2nd TRA’s most desirable personalities list.

The Mr. Perfectionist of Bollywood, Aamir Khan is well-known for bringing perfection in his films. He is one of the top actors in India who takes time in releasing a film but comes with a best. His birth date is 14 March 1965 in Maharashtra. He has a large global fan base, especially in China, and also recognized as the “Biggest Movie Star of the World” by China.

Aamir Khan Awards- He was honored with various awards like Padma Bhushan, National Treasure of India, Honored from Government of China, and more.

The Indian government is also planning to make Amir Khan, the Indian ambassador to China for trade purposes due to his popularity in China. Currently, he is working on his upcoming project “Laal Singh Chadda”.

When it comes to acting skills and dialogue delivery, Irrfan Khan is one of the top Indian actors. The popularity of Irrfan Khan was unmatchable and that’s what brings him in the list of the top 10 actors in India. His birth date was 7th January 1967 in Rajasthan. Not only in Indian Cinema, but he also worked in British and American films.

Irrfan Khan Awards- He was honored with Padma Shri in 2011 and also won the Filmfare award for the best actor. He died on 29 April 2020, but his acting helps in bridging the gap between Hollywood and Bollywood.

The Indian Jackie Chan and the best actor in Bollywood. Akshay Kumar gained huge popularity worldwide with his movies. He is an expert in performing roles in every type of movie such as romantic, crime thriller, comedy, and patriot. His birth date is 9th September 1967 at Amritsar Punjab. In his 30 years of career, he appeared in more than 100 films and win National film awards for his roles. Akshay Kumar is the most popular actor in India.

Akshay Kumar Awards- He was also honored with Padma Shri in 2009 which brings him to the list of the top 10 actors in India.

Currently, he is working on some of the most awaited Bollywood projects like “Bell Bottom”, “Bachchan Pandey”, and more. He also launched the most awaited made-in-India mobile game “Fau-G” on Republic day which is seen as the best alternative to PUB-G.

The superstar of the young generation, Ranbir Kapoor was born into the family of Superstars on 28 September 1982. Currently, he is one of the top paid Indian actors and also featured in the list of Forbes India’s Celebrity 100. He is also one of the top 10 actors in India.

Ranbir Kapoor Movies- Some of his famous films are Rockstar, Rajneeti, Yeh Jawani Hai Deewani, Sanju, and more. His “Sanju” movie is one of the highest-grossing Indian movies. Currently, he is working on the most awaited Indian film Brahmastra and also planning to get married to his girl-friend, Alia Bhatt.

Below I mentioned total movies/film of best actors in India.

The list of top Indian actors is a never-ending list. There are many more top actors in India who created a huge fan base with their acting like Rishi Kapoor, Ajay Devgan, Hrithik Roshan, Paresh Rawal, and more. Still, we come up with a list of top 10 famous bollywood actors in India having huge popularity among every generation of people.